Much like your flights, choice of Hotels will simply come down to your personal preferences but again I will try to give you as much information as possible to get you started!

Let’s begin with the Disney owned hotels. While they are the more expensive option they come with a few perks that you cannot find in other hotels.

There are three hotels owned by Disney: The Original “Disneyland Hotel”, “The Grand Californian” and “Paradise Pier”. The locations of these are shown in the map below. 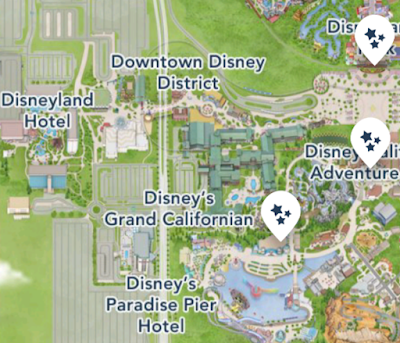 *The stars are essentially where the entrances to the two parks are, including the hotel only entrance to California Adventure Park direct from the Grand Californian.

When staying at a Disney Hotel there are a number of perks:

– Price of room comes with tickets for the number of days you are there. Extra fee if you want to do both parks in a day, which is called a park hopper ticket.

– Access to the park an hour before the general public, every morning, via monorail or private entrances.

– In house character meals and meet and greets.

– Package delivery from both parks to hotels so you can shop hands free.

The Disneyland Hotel has been there since 1955 but has been consistently upgraded over the years. It is the “standard” hotel but is by no means  cheap with prices starting from US$360 p/n, depending on date and room selection.

If your budget allows I would recommend this Hotel, especially if you have children with you.

The link for this Hotel can be found here: Disneyland Hotel.

The Grand Californian Hotel and Spa is the luxury hotel of the Disneyland Resort. It has a woodland/log cabin theme with many of the rooms featuring Disney critters like Bambi and Chip and Dale.

It is quite expensive costing a minimum US $417 p/n but you get what you pay for, with luxury amenities including a 55inch Smart TV in every room.

The best part of this Hotel is the private entrance direct into California Adventure Park making things so much easier!

More of a luxury retreat hotel for those who can afford it or honeymooners.

The link for this hotel is here: The Grand Californian

This hotel is basically a no frills version of the other two, with an overall beach theme inside and out. It is the cheapest option too with rooms starting at US $270.

Aside from the general perks you get at the other hotels, Paradise Pier Hotel features a roof top pool terrace where you can watch the fire works while the official soundtrack plays.

Good for families who want to get the most out of Disney for less.

The link for this hotel is here: Paradise Pier Hotel

Disney also provides a list of hotels they call “Good Neighbour Hotels”. These places are simply in close proximity to Disneyland, will sell/package tickets with accomodation and will offer shuttle services to and from the parks.

The Good Neighbour Hotels are your standard ones you find anywhere else in the world, such as Hilton, Marriott and so on. Basically you know what you’re going to get with prices averaging around US$250.

The best located hotels can be found on South Harbour Boulevard on the Eastern side of the parks, some of which are closer to the gate than two of the official Disney hotels. They include:

– Grand Legacy at the Park

The Camelot Inn and Suites. An inexpensive hotel, very close to the park gates.

Below is a map showing you the non-specific location of these hotels. 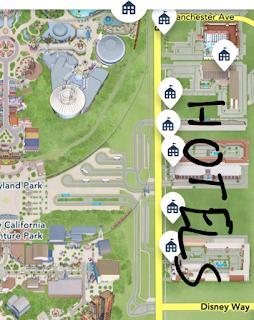 Well that’s it for hotels. Lots to consider but again it is completely up to you!