While the unique rides of Disneyland are the reason I love going, many  simply go for the atmosphere and fantastic entertainment. There are plenty of options available for these types of visitors, including the world famous fireworks, the Fantasmic Nighttime spectacular and an array of shows and street entertainment that could easily fill up 1-2 days of your trip. Keep reading to find out more! 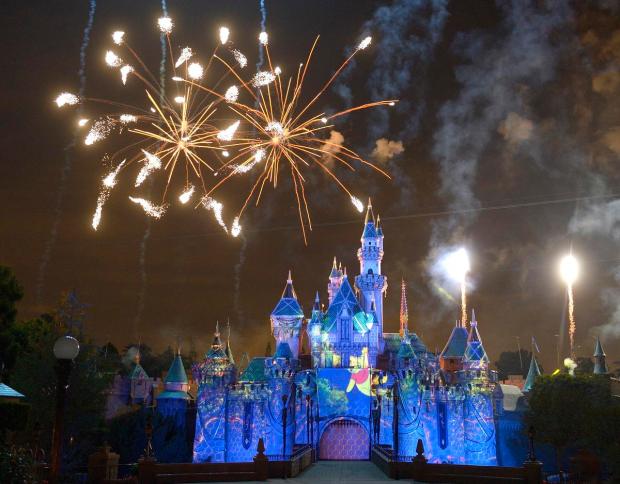 Show Times: 9:30pm every night (Except during inclement weather)

Best Vantage Point: Main Street USA (Fireworks can be seen from multiple positions in the Resort)

Recommendation: Unmissable (Literally because you can see it from most points of the park)

This is one bit of entertainment that Disneyland was never going to be without. It was in Walt’s plans from day dot that there would be a Fireworks show, acting as a “kiss goodnight” for his guests, before they headed home.

In its early days the fireworks show consisted of simple pyrotechnics. Today it is a full blown spectacular, combining music, characters and themes (depending on the time of year) that literally goes off!

Currently, the Fireworks show has a Pixar theme and features Buzz Lightyear flying around the castle.

Honestly, if you are not taking time out of your trip to watch this Disneyland institution then you really shouldn’t be going. While not as big as a typical New Years Fireworks show it is still way better. Partially because there’s not thousands of drunk people surrounding you but also because it’s Disney…Simple as that! The Finale to Fantasmic is pretty sensational! Sourced from Disney Tourist Blog

Best Vantage Point: Get a FastPass Ticket early and hope for the best.

Fantasmic is rated by many as the best show at Disneyland and it’s hard to disagree. It involves a combination of pyrotechnics, water, lights and character appearances.

The basic premise here is that we have entered Mickey’s dream. However, as he conducts streams of water, in time to music (Like in Fantasia), an epic battle breaks out between the forces of good and evil and he loses control.

During this battle we see everything from holograms on the mist to ships full of Pirates and the biggest, fire breathing puppet/animatronic I’ve seen. They have also recently included a new scene featuring Aladdin and Jasmine on their Magic Carpet.

It is important to have a background knowledge of this show as it is not really that clear what is actually happening. This, however, does not take away too much from the spectacle.

If you looked up nighttime spectacular in the dictionary, guaranteed there would be a picture of Fantasmic. This gargantuan show is really not to be missed, even though it is sometimes a little hard to follow.

Day Parades are not for everyone but you have to appreciate the effort that goes in!

Best Vantage Point: Front row up and down Main Street.

Parades are often a feature of large theme parks and cities throughout the world. We all know how they operate. With the budget of a Disney Park, however, these parades are always detailed, visually stunning and have the added bonus of featuring a whole heap of characters all at once.

Currently, due to Pixar Fest, the theme of the Disneyland parade is a refurbished version of the Pixar Play Parade, which once roamed the streets of California Adventure. Floats in this parade include:

Along with the floats, there are also street dancers and acrobats entertaining the crowd, as they pass along the parade route.

Generally guests of Disneyland love the parades. Personally I’ve never been a massive fan of any type of parade. I think it wastes perfectly good ride time! Having said that, Disney still does them better than most and if you are there for five days they are definitely worth seeing.

I have only seen video of the brand new “Pixar Play Parade” but like all Disney parades, they are a great opportunity to see characters that you wouldn’t normally see and the floats are very complex and detailed.

I give it a do, especially if you have kids!

Mickey and the Magical Map

Mickey and the Magical Map at the Fantasyland Theatre. Image Sourced from Disney Geek.

This theatrical show takes you on a journey with Mickey as he makes his way through exciting and colourful lands courtesy of, you guessed it, a magical map. The show features a host of classic Disney characters including:

– Tiana (The Princess and the Frog)

Each land you and Mickey visit features a fully choreographed song and dance number, to some of the best Disney movie tunes out there. Mickey and the Magical Map also includes a lot of crowd participation so be prepared to sing, yell and dance.

Even though this show is aimed at the young ones (under 12), there is (as with all Disney entertainment) enough for the adults to keep interested. However, I wouldn’t really bother too much if you are without children.

Story Telling at the Royal Theatre 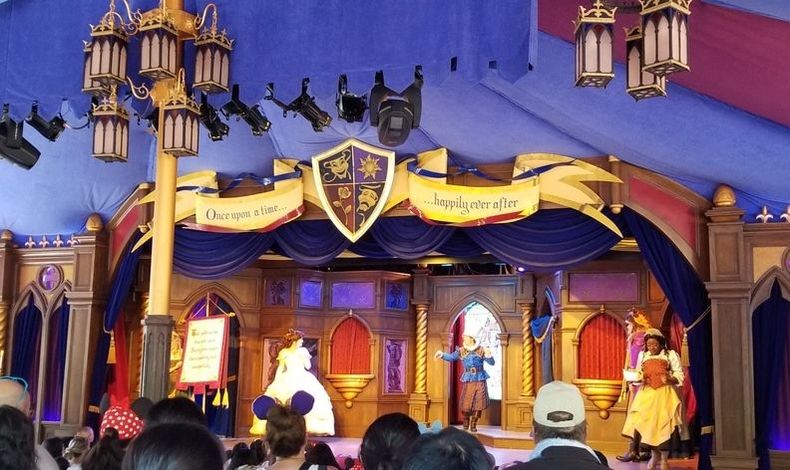 Enjoy a could ol’ fashioned pantomime at the Royal Theatre. Image sourced from Disneyland 4 Ever.

Not too much to write about here. Quite simply, a comical duo (Mr. Smythe and Mr. Jones) re-enact scenes from both Beauty and the Beast and Tangeld. It is very much a pantomime performance with melodramatic acting and crowd involvement a must.

Much like Mickey’s Magical Map, this show is made for kids but there is plenty to chuckle about for the adults accompanying them. Once again, don’t bother if you are not with children.

Street bands and shows are integral to the atmosphere at Disneyland. Whether you see/hear one during lunch or as soon as you enter the park, they really set the tone for your day. Not to mention they are also, high quality entertainers.

You can see a variety of different performers throughout the park and they are all themed to where they are based. Below is a list and description of Street Entertainers at the Disneyland Park.

Recommendation: Fun for all.

The oldest and most famous of the Street Entertainment at Disneyland, The Disneyland Band is as popular as ever. It is simply a marching band that plays medleys of Disney songs. Really good fun to watch. They appear predominantly on Mainstreet but also do a different set in Frontierland daily.

Spoiler Alert: A sample of the Disneyland Band playing Pirates. Video thanks to DAPS MAGIC.

Recommendation: Fans of acapella will love it!

The Dapper Dans are a Barber Shop Quartet that have been performing since 1959. They have very clever shows and also contribute to the flag retreat ceremony in the evening. Definitely worth a look.

Recommendation: Worth a look.

The Mainstreet Pianists are very skilled in their craft and are great performers. They perform Classical versions of Disney songs with an often ragtime feel. Sets last approximately 20-25 minutes. Great for when you need a break.

The Straw Hatters are a small group of members of the Disneyland Band, playing classic up beat tunes on wind instruments. It is not so much the best stand and watch kind of show but they do add good atmosphere to the Park.

Recommendation: Worth a look

Pearly Band is a 7 piece instrumental group that are dressed like the band at the racecourse from Mary Poppins. They play upbeat, atmospheric songs and are sometimes joined by Mary Poppins and Bert. Give it a whirl, especially if you can catch the aforementioned characters.

Simply a frontier themed band that plays either on top of the Golden Horseshoe or inside on the stage. They only have one showing at a seemingly inconvenient time, so you don’t have to visit in the least. The provide good atmosphere for the area but you will hardly notice their presence.

Show Times: Varying (Check App on the day or ask a Cast Member)

This band of rum swilling pirates provides great musically entertainment for all. They have a good bit of banter between their songs and sometimes get the crowd involved. You can find them in the alley ways of New Orleans, or outside Pirates of the Caribbean.

The only issue with this group is that they have no real set showtimes so keep yourself updated, if you are keen.

Spoiler Alert: A small taste of the Bootstrappers from my trip in 2015.

If you love a bit of Jazz then you probably shouldn’t miss out on these guys. Great to listen to while enjoying lunch at one of the many New Orleans’ eateries. These guys perform throughout New Orleans Square and also do a pretty cool set on the Mark Twain Riverboat once in a while.

The main difference between the Royal Street Bachelors and Jambalaya Jazz is that they have a permanent spot atop the French Market Stage. This enables them to have a drum kit set up along with the usual jazzy instruments.

Sets last about 15 minutes and, like Jambalaya Jazz, are a great atmospheric band for lunch time dining.

Spoiler Alert: The smooth sounds of the Royal Street Bachelors. Video thanks to Window to the Magic.

To read about the entertainment available at the Golden Horseshoe have a read of the Frontierland Rides and Attractions post.

The entertainment at Disneyland (and California Adventure) is the best Theme Park entertainment out there and is streets ahead of any theme park we have in Australia. So if you are tossing up whether or not to visit Disneyland, based on Rides alone, I hope this has helped to sway you!