Grizzly Peak is one of my favourite areas of California Adventure. Not only does it feature two brilliant attractions (Grizzly River Run and Soarin’) but it is also just a pleasant place to be. Despite being crowded on some days (especially in the warmer months), it always feels less busy and calmer than anywhere else in the park due to its “natural beauty”. Moreover, it’s probably the only place left in California Adventure that hasn’t undergone any dramatic change.

Me and Rach after the final drop on Grizzly River in 2015.

Grizzly River Run is a White Water Raft ride set within the picturesque Grizzly Peak. It features two main drops, plenty of rapids and just a whole heap of wet!

Built as an opening day feature attraction at California Adventure, Grizzly River Run is a salute to the Californian wilderness, where the Grizzly Bear roams. Unlike many of its contemporaries this attraction survived the great DCA ride cull and is still going strong today. I remember watching the Great Outdoors when DCA first opened and Ernie Dingo showcased this ride. I was desperate to go on it then and 10 years later it was exactly how I remembered. It has remained beautifully unchanged.

Remember this guy? He basically introduced me to California Adventure…Image from Apples and Pears Entertainment.

Much like rides including the Haunted Mansion and Buzz Lightyear Astro Blasters, the Grizzly River Run has a continuous motion loading dock. Instead of conveyor belts, however, it has a massive, round turn table, from which you hop into your round rafts.

As with any ride your journey begins with the ascent up a lift hill. This actually takes a little while on this ride, so you have plenty of opportunity to make awkward small talk with the people in your raft. The dream.

From here, basically be prepared to get soaked, especially if you are sitting next to the opening of the raft. You careen down the whitewater river, entering caves and passing all sorts of scenery. You eventually come to your first drop. Not as steep or high as Splash Mountain but it does what it needs to do.

It is much of the same for the rest of the ride, with the climax of the final drop a major highlight.

Let’s rip the band-aid right off early with this one. After what happened at Dreamworld, with the tragic Thunder River Rapids incident, many have been put off these type of rides and with good reason.

I personally love Grizzly River Run and have more faith in the Disneyland Park operations than I do in the often understaffed Dreamworld. As always though, it is entirely up to you.

Soarin’ Around the World A picture paints a thousand words with Soarin’ Around the World. Sourced from Doctor Disney

The Soarin’ Ride is a modern Disney Parks classic, featuring at California Adventure, EPCOT (Walt Disney World) and Disneyland Shanghai. It is essentially a large scale flying simulator ride that takes you on a flight through various landmarks around the world. Back when California Adventure was all about California, this ride had a different film dubbed “Soarin’ Over California”

I know what you’re thinking. Another simulator ride? Snoozeville! And you would be right if this was anything like a normal simulator. With Soarin’, instead of being cooped up in a tiny box, among smelly theme park goers you are in a very large cinema sized room, with a hemispherical screen. Instead of sudden and jerky movements you have a predominantly smooth ride, which inevitably equals significantly less motion sickness.

Soarin’ Around the World is themed as the Grizzly Peak Airfield. The Ride itself is set in what looks like a giant airplane hangar, with the queue paying tribute to the long history of American air travel. After learning a few interesting facts in the queue, like Star Tours, you are taken to a “boarding gate” where you are given safety instructions from your smooth talking pilot; Patrick Warburton. From here you enter the “theatre” and take your seat.

All of a sudden you are lifted up to be level with the screen. On it flashes and you begin your flight around the world. As the movie clip plays you are gently tilted up and down or sideways to simulate the appropriate movements, while wind is blown in your face and various scents sprayed to make the experience extra immersive.

After visiting the cliche’d but beautiful landmarks you end up at Disneyland at night just in time for the Fireworks. And scene!

Lovers of rides or not, you just have to experience this fantastically original attraction! Definitely in my top 3 at California Adventure. The best thing is, if you have no plans to go to Disneyland in the near future, Dreamworld is currently transforming its own Imax cinema into a Flying Theatre. Good news for the continually improving Australian Theme Park Industry.

Spoiler Alert: Please find the POV of Soarin’ Around the World below thanks to LMG Vids. Be warned this video does not do this ride justice whatsoever. 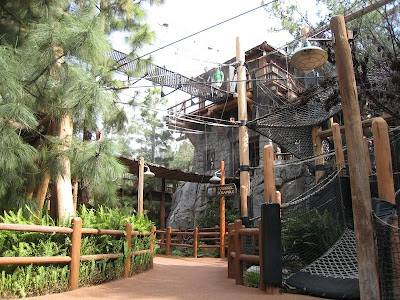 – Ride Duration: Until the kids get tired or you get tired of watching.

Like the other attractions in Grizzly Peak, The Redwood Creek Challenge Trail was a DCA opening day attraction, in 2001. It is basically a large playground with plenty of things to climb, swing, slide and zip-line on. Think Chip and Dale’s Treehouse but bigger and better.

The attraction itself is currently themed to the film “UP!” and is set up like a scouts challenge course. You can earn “badges” and meet characters from UP!, including Russell and Doug. There is also a Senior Wilderness Explorer ceremony at various times during the day.

Probably the best all round “playground” type area at the entire Disneyland Resort. Good fun for kids of all ages but children in middle to upper Primary School will get the most out of it. If you don’t have any children in your party it is missable, unless you are playing character bingo and need to tick off some UP! characters.

While a walk through Grizzly Peak isn’t long, sometimes you really want it to be. It is a calm and somewhat quiet oasis among the busyness of  theme park activity. It also has two of the best family friendly rides in the park and considering they were original attractions that’s saying something. Definitely worth the price of admission!