The changes to California Adventure have not only seen a great improvement in rides and aesthetics but also in entertainment. While there are fewer options available, there are still plenty of fantastic shows, equal to those across the ditch at Disneyland. Let’s get into it!

The Spectacular World of Colour. Image thanks to Harshlight

Best Vantage Point: Get a FastPass Ticket early and hope for the best.

World of Colour is up there with the top three entertainment options at the Disneyland Resort. It is a brilliantly conceived combination of pyrotechnics, water and lights that bares many similarities to Fantasmic. Of the $US1.1 billion dollars spent upgrading California Adventure, World of Colour cost a whopping $US75 million. Worth it? Absolutely!

The World of Colour Show itself uses musically synchronised fountains, lights and projections to produce a seamless montage of classic Disney films (animated and live action) that really tugs at the old heart strings. Highlights of the show include the Aladdin and UP! sections but the cherry on top is the brilliant Pirates of the Caribbean act, whose songs alone get the adrenaline pumping.

And this is just the intro! Image thanks to Johensonthe3rd

Like Fantasmic, World of Colour deserves the title “Nighttime Spectacular”. It really is an amazing show that needs to go on your “Must Do” list! Again, like Fantasmic, this show requires a FastPass ticket to reserve your spot on the lake. If you don’t manage to snag one there is also unreserved standing areas available at a first come first serve basis. 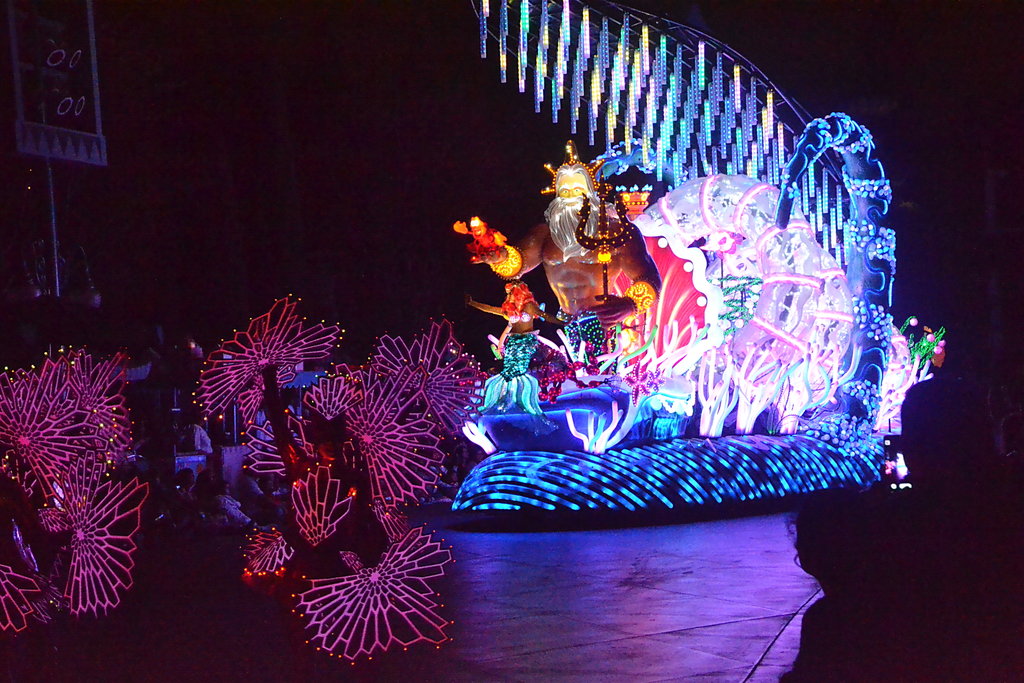 The Little Mermaid Float. Image thanks to Eekster.

Best Vantage Point: Anywhere along the Parade route, at the front.

Since it arrived in Disneyland from its Hong Kong twin, the Paint the Night Parade has been a massive hit! Even I really enjoy this show and I dislike parades immensely! It follows the general pattern of parades everywhere; line up your floats, dancers and characters and let the show begin. So what is it about Paint the Night that gets everyone up and about?

For one, there is a bit of nostalgia involved, as it is essentially an updated incarnation of the classic Main Street Electrical Parade (which comes back every now and then), soundtrack and all. It is also just an enormous spectacle. I thought I had seen everything at Disneyland before a full scale, Mack the Truck (from Cars) passed by with what had to be a few thousand lights attached. Just brilliant.

Minor spoil alert! One of my favourite parts of the parade! Taken on my phone a couple of years back so the quality isn’t great but I promise to get better shots next time I go!

For me to recommend a parade to anyone is a big deal but Paint the Night is simply one you cannot miss. It’s so good that it may have ruined all other parades for me permanently. 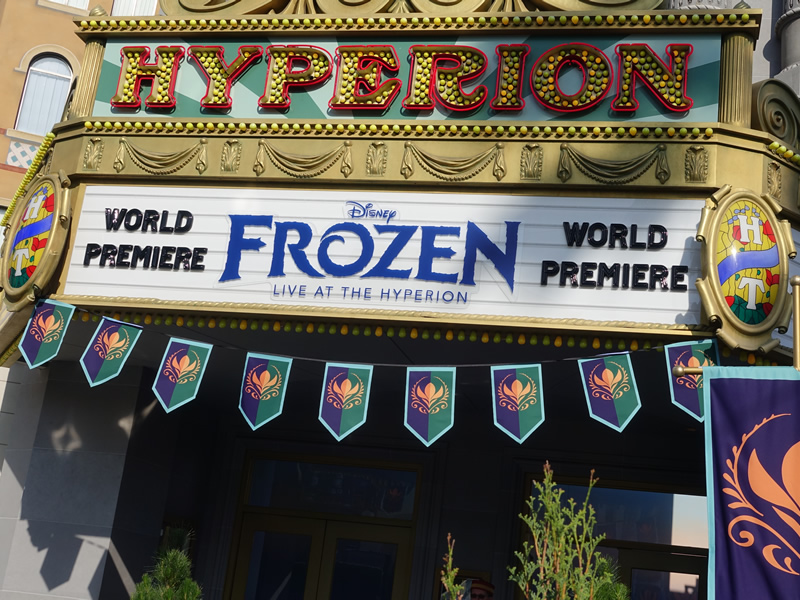 Frozen at the Hyperion. Image thanks to MousePlanet

The title of this one doesn’t leave too much to the imagination. Frozen: Live at the Hyperion is an abridged but full scale musical stage show based on the insanely popular 2013 film.

Before hosting Frozen, the Hyperion theatre saw a number of productions waltz in and out of its doors including Aladdin: A Musical Spectacular, which had the longest stint, running for 13 years.

What’s great about these theatre shows is that they feel very much like actual Broadway productions. Sure the acting may not be as good and there can be some technical issues but overall they are quality productions. Put it this way; when Aladdin came to Melbourne in 2017 I felt I didn’t need to pay the money to see it because I saw a great version at California Adventure.

Your enjoyment of this show will come down to two things: whether you (or your kids) like Frozen or whether you enjoy musical theatre. For me it’s a should do simply because I know this type of thing is not for everyone. If you are short on time I would almost recommend skipping it, especially if you haven’t done some of the other important rides and attractions.

Note: I will not post any in show photos to avoid copyright infringement. 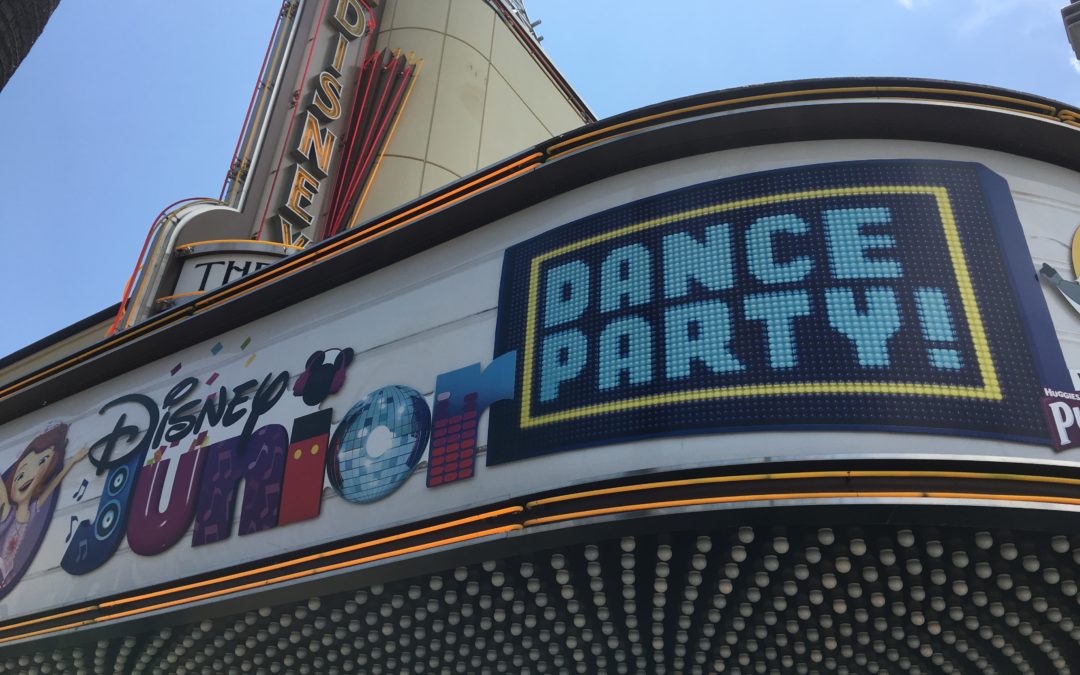 Disney Junior Dance Party is an interactive singing and dancing show featuring the stars and songs of Disney Junior TV shows. Characters include Sofia the First, Doc McStuffins, Timon and of course Mickey and Minnie.

This nice little show is a good way to include the TV aspect of the Disney Empire and is the only place in the park that the little ones can see some of the aforementioned characters. I’ll give it a do if you have 2-6 year olds in your party. Did I mention it’s also climate controlled?

Just like at Disneyland, street bands and shows are essential to the overall experience at California Adventure. While their aren’t as many options, these performers create the brilliant atmosphere that has helped transform California Adventure from cheap and nasty, to high class.

You can see a variety of different performers throughout the park and they are generally themed to where they are based. Below is a list and description of Street Entertainers at California Adventure.

Note: Please remember show times listed can vary from day to day. Always best to check your App to keep up to do date.

Recommendation: One for the the grown ups.

Five and dime in Motion!

One of my favourite acts in the park, Five and Dime is a great 1920s style Jazz Band that roams (or drives) around Buena Vista Street playing music. Think of the song “Puttin’ on the Ritz” and you’ve got the right idea here.

Recommendation: Worth a look

Like the songs from Newsies? Then you will love the Red Car Trolley Newspaper Boys. Image thanks to Harshlight

Awesome group of turn of the century newspaper boys, inspired by the Disney film Newsies. They sing and dance the headlines both on and off the Red Car Trolley. Good fun!

Guardians of the Galaxy: Awesome Dance Off!

Recommendation: For the Marvel Lover 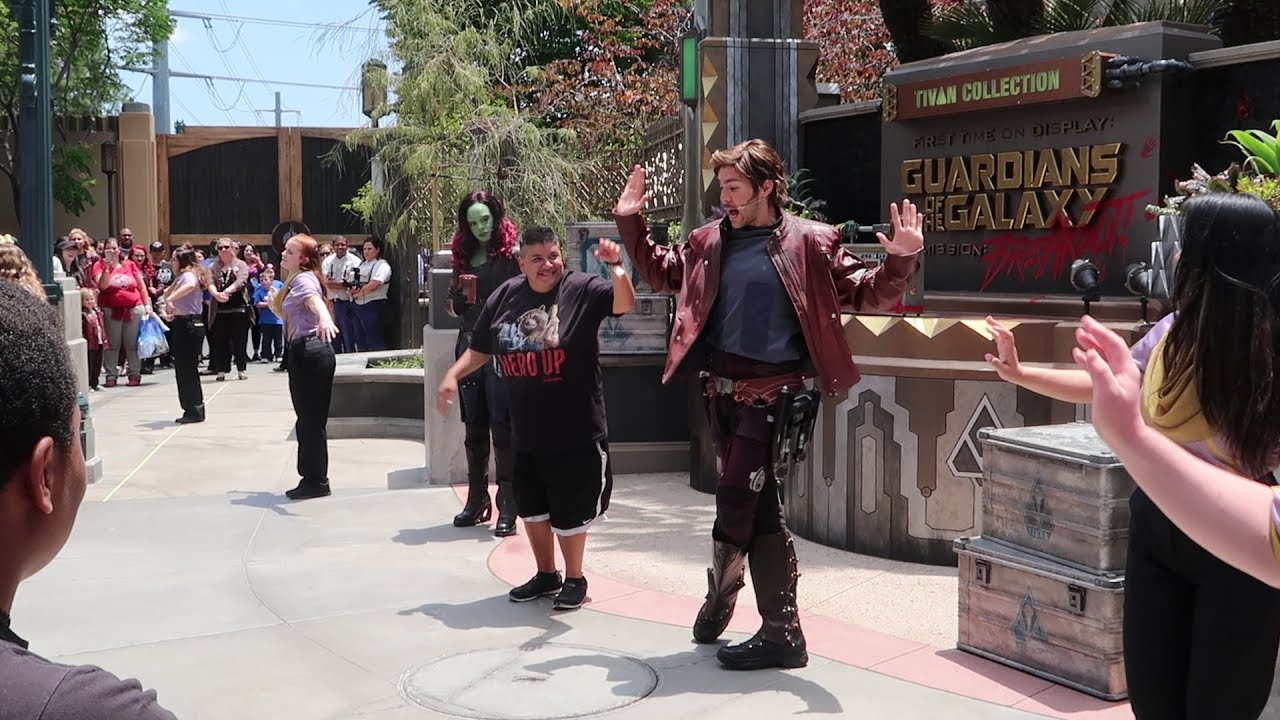 See Star Lord and Gamora lead a dance off, using some of Peter Quill’s favourite mix tape tracks. Oh and Groot’s there too. This one should really fall into my characters post but it has too much of a show element. I’ll Leave it up to you whether it gets done but I’m not going out of my way to catch see this one.

Recommendation: See if passing through.

DJ the Nissan Skyline of Carsland gets pulled over all the time. Image from Harshlight

In DJ’s Dance ‘n Drive, suped up car DJ leads his waitress and mechanic friends in some funky dancing. (Is it just me or do a lot of these shows involve some sort of dancing?) This one is not essential but take a look if passing through. 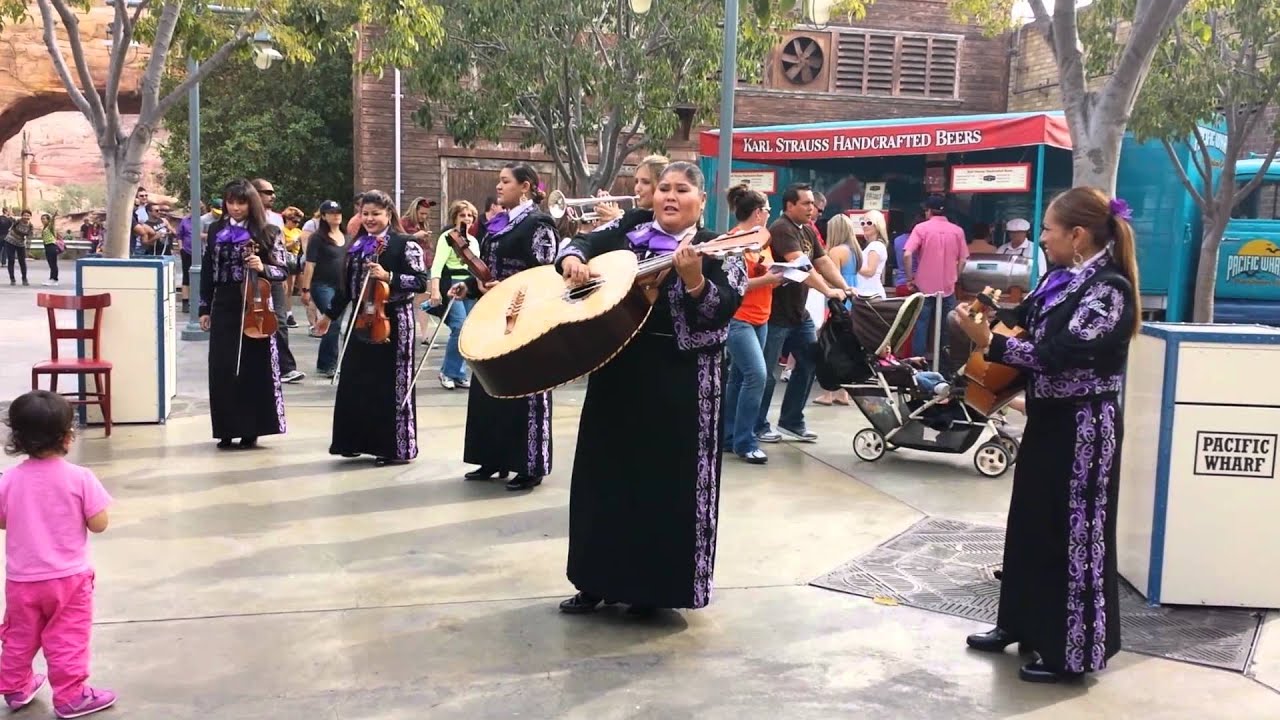 The Mariachi Divas are a Grammy Award Winning group who do mariachi medleys of Pop Music and traditional Mexican folk songs. Worth a look if you’ve stopped for lunch at Pacific Wharf.

Recommendation: Worth a look.

The Green Army Men about to train some new recruits. Image thanks to Mouse Info

Ever wondered what it would be like to be a Green Army Man from Toy Story? This 13 minute street show will give you (your children) that opportunity. The show consists of the Army men training new recruits in the art of playtime. It’s something different and involves little-no dancing! 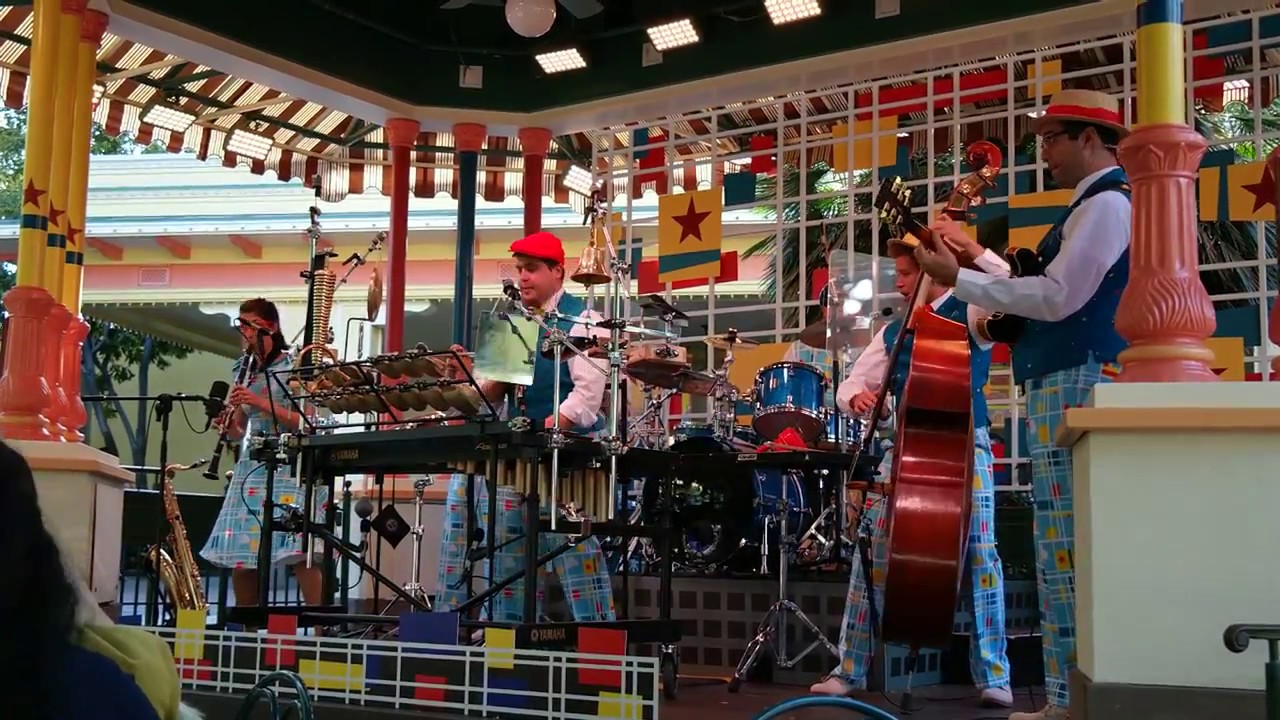 The Pixarmonic Orchestra in full swing. Image thanks to Brian Pinsky (YouTube)

The Pixarmonic Orchestra is a great little 7 piece ensemble that covers all the best Pixar songs with a comedic twist! Definitely worth a look, especially if you are down that end of the park.

Simply a place where a variety of performers will stop by and play. I saw the Mariachi Divas here once, so it really is a revolving door with no set acts.

There we have the end of another post. As usual I hope it was helpful. Let me know your favourite piece of DCA entertainment in the comments below!

to come so stay tuned!